Why offering coverage may save medical insurance companies money

John A. Hodges, DDS, FICOI, says, “After the recent denial of full-arch rehabilitation for a patient of mine, I decided to try a different approach with her medical insurance company. I posed this question: Regardless of their policy toward dental implant coverage, in this patient’s case would they be financially better off paying to treat her with fixed implant-supported bridges versus not doing so and then having to pay for the future digestive complications associated with a failed oral system?

The act of chewing efficiently has a significant impact on a person’s digestive process. Proper and efficient chewing not only reduces the food particle size to aid in digestion and nutrient extraction, but increased saliva secretion from chewing lubricates food particles for easier and safer swallowing. Salivary enzymes initiate the breakdown of carbohydrates and fats, and increased saliva production signals the brain to tell the stomach to produce acids, the pancreas to secrete digestive enzymes, and the small intestine to prepare for absorption.

When a person chews at or near maximum chewing efficiency he or she is able to greatly increase the surface area of the food bolus, which assists the body in the extraction of nutrients. (1) At the Institute of Food Technologists’ Annual Meeting in 2013, Purdue University presented the results from a study that researched food absorption. Researchers concluded, “Particle size affects the bio-accessibility of the energy of the food that is consumed. The more you chew, the less is lost and the more is retained in the body.”

It never ceases to amaze me that even with the established importance of chewing to our overall health, the medical insurance industry and its regulators have all but abandoned the oral health system. In my experience of working with medical insurance coverage for dental implant patients, we successfully get some form of coverage less than 20% of the time. This percentage drops below 10% when it comes to getting medical insurance coverage for full-arch rehabilitation. And in most of these cases the surgical portion is subject to coverage through medical insurance, but not the restorative portion. Although I appreciate any assistance from insurance in these cases, it is hard not to equate this lack of complete coverage to having an insurance company pay to surgically remove a patient’s bad knee and then not pay to have the new titanium knee put into place.

After the recent denial of full-arch rehabilitation for a patient of mine, I decided to try a different approach with her medical insurance company. I posed this question: Regardless of their policy toward dental implant coverage, in this patient’s case would they be financially better off paying to treat her with fixed implant-supported bridges versus not doing so and then having to pay for the future digestive complications associated with a failed oral system? 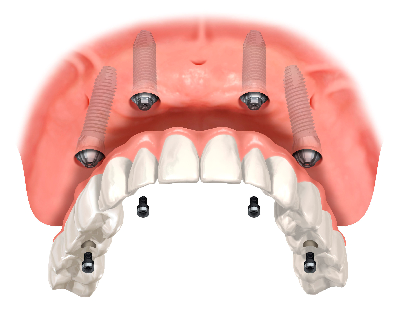 A person chewing with upper and lower dentures will only achieve 20% (an average of 30% for the upper denture and 10% for the lower) of the chewing efficiency of a person chewing with a full set of natural teeth, whereas a person chewing with upper and lower implant-supported bridges will achieve 90% chewing efficiency (figure 2). (2)The ability to extract additional nutrients from the food bolus can have a significantly positive impact on a patient’s overall health. Studies have tied the use of implant-supported bridges versus dentures to an increase in life expectancy of seven years. (3) To maximize a patient’s health and reduce future costs, it is important to use a fixed prosthesis versus a removable one. 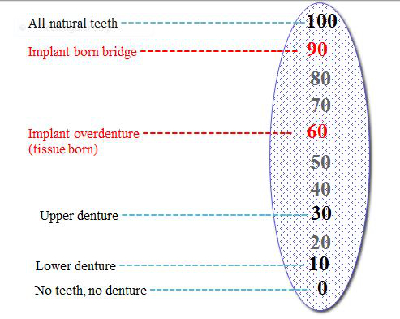 To put this into perspective, consider the more expensive procedure of total knee joint replacement. At an average cost of $49,500 per knee, (4) the cost to restore one leg to function is nearly double the cost to restore one dental arch to function with an implant bridge. According to Cedars Sanai, approximately 90% of replacement knee joints last 10 years, while 80% exceed 20 years. (5) This procedure is routinely covered by medical insurance, yet one could argue that although a patient’s ability to be active and quality of life are improved with a total knee replacement, the impact on overall health and possible reduction in future medical expenses are less than what would be achieved with restoring his or her oral system to near full function.

Posing the question: An excerpt from my rebuttal letter
The following is taken from a letter that I sent to a major medical insurance company for a patient whom I will call Mary.

Mary is a 42-year-old patient who had gastric bypass surgery for excessive weight five years prior to seeing me. She has suffered from multiple digestive ailments, including an inability to maintain a healthy body mass, since the surgery. Mary’s oral system is in dysfunction (figure 3), and she was referred to me by her digestive specialist in hopes of improving her ability to chew efficiently. 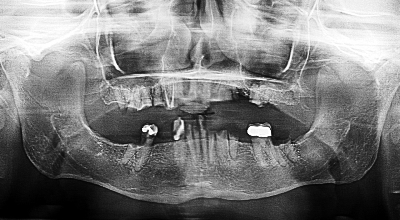 Mary is suffering from severe dental dysfunction. Of her 18 remaining teeth only three on her lower arch protrude through her gum tissue, and those teeth are severely decayed and functional. She is suffering from multiple chronic infections surrounding the remaining tooth fragments. On a positive note, Mary has adequate lower jaw bone to support a temporary fixed implant-supported bridge to be placed at the time of tooth extraction, and her upper jaw bone can be repaired with bone grafting at the time of tooth extraction, followed by implant placement after sufficient bone healing.

By restoring Mary’s chewing efficiency to a high level, not only can we improve her overall health and quality of life, but we can reduce the costs to your company by potentially reducing the number of medical procedures she will endure over time. Per the notes of her medical doctor, Mary has suffered multiple digestive tract complications following her gastric bypass surgery in March 2011. These complications include, but are not limited to, malnutrition, generalized abdominal pain, gastroesophageal reflux disease, esophagitis, depression, and opiate dependence.

Malnutrition
As expressed earlier, proper chewing of the food bolus can significantly improve Mary’s ability to absorb much-needed nutrients from her food. Additionally, the enzyme salivary amylase, which is contained in the saliva, initiates the breakdown of carbohydrates. Salivary amylase only works in the mouth and the esophagus. It is deactivated once it contacts stomach acids. (6) This enzyme requires prolonged chewing time in order to be effective, and Mary is currently unable to chew for any prolonged periods. Liquid carbohydrates receive insufficient salivary amylase contact time to be a substitute to chewing.

Mary’s weight dropped to 70 pounds due to malnutrition as recently as mid-2015. She required a stay in a skilled nursing facility with total parenteral nutrition (TPN) feedings. With this treatment she was able to gain 20 pounds, but since discontinuing the TPN feedings she has struggled with frequent episodes of low blood sugar.

Cost impact per month of TPN feedings if required: $14,752

Generalized abdominal pain and opiate dependence
Chewing efficiency can impact abdominal pain. Creating a smaller food bolus with increased surface area assists acids and peristaltic contractions in the stomach to form a more uniform mixture of chime, which leads to more complete digestion. Large particles of improperly chewed food may remain undigested when they enter the intestines. This can lead to bacterial overgrowth on the undigested food (decomposition), which can lead to flatulence, bloating, abdominal pain, and even systemic infections.

It may be possible to reduce Mary’s dependence on opiates if her abdominal pain is reduced. From 2000–2007 there were 690,205,290 outpatient visits for chronic pain in the United States, costing an annual average of $17.8 billion for prescription pain medications. (8) If Mary reduces her prescription costs by $100 per month for 20 years, the cost savings would be $24,000.

Cost impact of office visits for abdominal pain and prescription opiates: Possibly $24,000 or more over 20 years

Esophagitis
In addition to the discomfort Mary experienced due to esophagitis (see opiate dependence above) her risk of a food impaction incident is greatly increased. Dr. Hin Hin Ko noted in her article, “Review of Food Bolus Management” that food impaction results from two factors. (9) The first factor is the state of the esophagus, and the second factor is the nature of the food that has been swallowed. Dr. Ko states that esophageal food impaction is a common emergency faced by gastroenterologists.

Other studies have noted:

Dr. Ko also noted, “When these underlying esophageal conditions are present, and if food, especially meat, is chewed and swallowed precipitously, acute food impaction can occur … 10%–20% may become lodged in the esophagus or other locations in the gastrointestinal tract and may require nonoperative intervention, and 1% or less will require surgery.”

There are two primary ways that food impactions are treated nonoperatively. Patients who go to the emergency room (ER) typically have glucagons administered intravenously in hopes of getting the food impaction to spontaneously pass. This requires a CT scan of the chest to ensure that the food particle isn’t sharp. Per the National Institutes of Health, the cost of an average ER visit is $1,233 plus tests and treatment. According to New Choice Health, the average cost of a chest CT scan in Seattle is $1,935. The second means of treating a food impaction is for a gastroenterologist to perform an endoscopy to remove the food impaction or to dislodge it for digestion. New Choice Health reports that the national average cost of an endoscopy is $2,700 plus sedation and airway-management fees.

Hospitalization
Mary’s malnutrition and resultant side effects make her a very likely candidate for multiple hospital stays over the next 10 years. According to a health-care cost review by Drs. Audrey J. Weiss and Anne Elixhauser, the average cost of a hospital stay in the United States is $10,400, with an average duration of four-and-a-half days. (12)

Over the next 10 years if Mary requires two months of TPN feedings in a nursing facility, two hospital stays, one food impaction to be cleared, and if she sees no reduction in her dependency on opiate medication, her medical bills likely will exceed $65,000 prior to inflation. And this projection of her treatment needs may be conservative considering the amount of care she has received in the last three years.

The cost of treating a full-arch with a dental implant-supported fixed bridge can exceed $100,000 per arch with some surgical and prosthodontic teams, but due to prices being standardized nationally by large clinics (such as Clear Choice and the Malo Clinics) that offer this service only, the price per arch is pretty consistent at $25,000–$30,000 per arch on a national level. Costs in the Pacific Northwest are consistent with this.

The claim was denied again
I wish that Mary’s insurance company had seen things differently, but I wasn’t surprised. With an estimated 61,000,000 edentulous arches in the United States by 2020 (13), the thought of offering coverage must be terrifying for medical insurance companies. While understandable, I don’t have a solution to this dilemma. However, I hope the information in this article may help you draft similar arguments on behalf of your patients. Perhaps with a little luck and a lot of tenacity, we may be able to change the lives of a few fortunate people.

John A. Hodges, DDS, FICOI, a 1993 graduate from the University of Southern California Dental School, runs a practice dedicated solely to dental implant services in Covington, Washington. He has restored more than 125 fixed full-arch implant restorations and is a Nobel Biocare CAD-certified technician. Dr. Hodges lectures nationally for Neoss and Nobel Biocare on subjects including full-arch implant prosthetics, restorative complications, and Locators. He completed the fellowship program at the California Implant Institute and is a fellow of the International Congress of Oral Implantologists. You may contact him at dr.hodges@disnw.com.

Call us or contact us below to schedule your free consultation.